How it works at Princeton – Roommates

Over the summer before coming to Princeton, all the pre-frosh (high school graduates/incoming freshmen) are asked to fill out a housing preferences form. This survey wasn’t too detailed in my opinion, but it did ask the basic questions like how many roommates I want, my sleeping habits, how clean I like my room, how warm I like my room, etc. It also threw in some odd questions like what my favorite type of music is, which I’m sure is one way they try and figure out what type of person I am. All of this is designed to make sure everyone’s preferences are accommodated for to at least some extent.

Other than that, your room assignments are pretty much based on change. There was a place on the form to add additional comments, and I said I wanted to be as close to the pool as possible; a few extra minutes of sleep a day before heading out to morning practice can make a big difference! Apparently my pleads were not heard because I was placed in Witherspoon Hall, which near the north west corner of campus. While the walk to the pool on the south east side of campus can take about 20 minutes, a bike can get me down there in 3-4 minutes, so the distance hasn’t bothered me much (yet). Some of my friends had rooms quite different from their hopes and expectations too, with one friend requesting a double in his housing form, but ending up in an 8-person room! 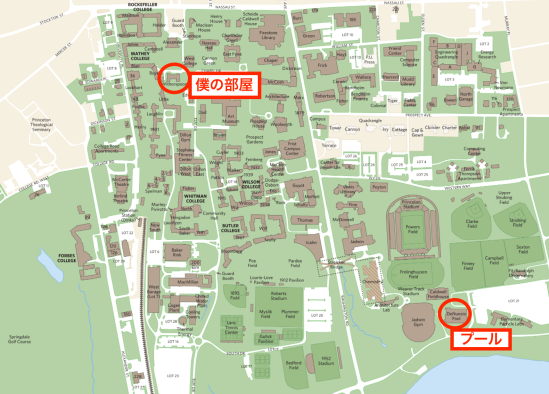 Perhaps one of the busiest days was move-in day for freshmen. On this day, most of the 1300 incoming freshmen from all across America moved into their dorms. With the crowded halls and tons of boxes lying everywhere, it can be pretty stressful. Luckily for students from overseas like me (and perhaps you!), we are permitted to move in a couple days earlier as part of a short program to familiarize international students with the campus and life in America (International Orientation). Because of this, the process of moving myself into my room in Witherspoon Hall (picture below) was not a hassle at all. Just don’t forget to bring bedding, which you can buy at a nearby Bed Bath and Beyond if you decide not to bring it from home. While I managed to cram everything into a couple of suitcases (my parents came with me), there are many people who ship over things in boxes, both international and American students. 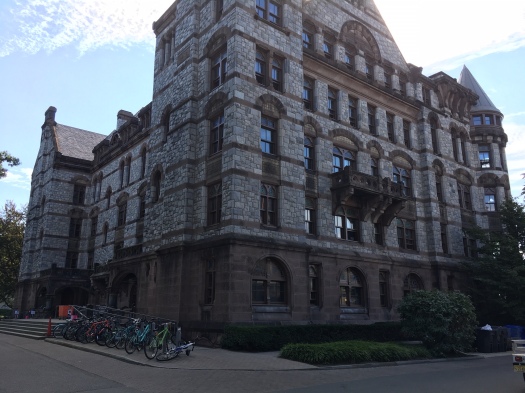 You also might want to figure out which person gets which bed or room if you have more than one roommate. Thankfully my roommate was okay with me picking the bottom bunk, since I would be waking up early in the morning every day. Your roommate may not be as tolerant or flexible as mine is!

I initially wanted a quad (a four-person room), because if I didn’t get along with one of my roommates, I would still have two other people that I might get along with. When I was assigned a double, I really hoped that Matthew, my to-be roommate, was a cool guy. (After meeting him he told me he was hoping the exact same thing about me). What made things worse was that because our time zones were 14 hours apart, it was difficult to get in touch with each other. Surprisingly, the first time we met was at Target before he moved in, when we caught ourselves shopping for dorm supplies. We vaguely knew each other’s faces, so we had a similar reaction when we recognized each other.

I think what Princeton tries to do is mix people with different backgrounds together, meaning they don’t group the international students together, the athletes together, etc. This was interesting for me because some of my friends from high school now live in “international” dorms, and I know that some universities can have separate dorms for athletes. I think this is a better approach to dorms, since you’re not stuck with people who share the same culture or ideals as you. At Princeton you are already in the “Orange Bubble”, so having roommates and hallmates that aren’t from overseas or aren’t athletes broadens my horizons and lets me appreciate the diversity on campus.
After living with Matthew for a semester now, I am thankful that he is my roommate this year. If I am not with the swim team, I am probably fooling around with Matthew and our hallmates. We take very different classes (I took science-y courses and he took politics classes this semester), but we tried to have one meal together a day. Hopefully we can still do this next semester when our class schedules change!

Today’s link is another youtube video, but this time it’s something that I found maybe one or two years ago. It popped up while browsing the web on New Year’s Eve, and I thought it was perfect motivation for the new year. 今年も頑張ろう！ネバーギブアップ！！